One year ago this week , I mean @monadic, better known off-Twitter as Alexis Richardson, CEO Weaveworks and the CNCF TOC chair wrote an interesting 2017 cloud native predictions post for vmblog.com. I found it interesting enough that I shared it around with several colleagues, one of whom challenged me to set a calendar reminder to revisit it one year out. That calendar entry hit as I traveled to KubeCon/CloudNativeCon in Austin, and I thought, what better time to review his predictions publicly. In the style of the ancients, I assume we will either burn him at the stake for heresy, or hail him as a god depending on the outcome. Per IBM legal: I’ll leave it up to the CNCF Code of Conduct experts to determine viability of any actions taken for/against Alexis. Let’s jump right in.

Container Wars are over.  Non-standard tools are now toast.

Peace breaks out between rival camps as customers decide they want to run Kubernetes on Docker in a fully supported enterprise-grade stack that actually works. Everyone else moves to support this or packs their software back into their luggage. The ecosystem of dev tools, add-ons and extensions finally takes coherent shape. The OpenStack and PaaS communities explicitly endorse the emerging Cloud Native stack.  Enterprise app stores begin to get traction, starting with Docker’s store.

This prediction is hard to score. In one sense, Docker’s announcement of Kubernetes adoption/support into desktop and enterprise edition products definitely underscores a huge break in the tension in the orchestration “wars” if there was one. The OCI 1.0 milestones for both runtime and image spec, long-awaited to deal with differing opinions and implementations at the lower runtime level, was also a huge win for 2017. However, as painful as it is personally to accept, we still have too many questions about whose runtime is the “winner” from the containerd, cri-o, rkt set. And new entrants like Kata, although not necessarily a new runtime as much as an OCI implementer like runc, potentially cloud the picture for customers. The good news is that with the CRI in Kubernetes, actual end customers shouldn’t have to care who “wins” the container runtime wars. Stable and boring are winning, and that’s good for customers. To the point on PaaS and OpenStack, the Kata announcement as well as Cloud Foundry adoption of OCI and the PKS announcement from Pivotal are dead in line with predictions from Alexis. Looking good so far. Next:

Rise of the Container Cloud

Using the emergent Cloud Native stack, all cloud providers sell container hours, as well as VM hours.  With this in place, each cloud provider takes steps to fully integrate containers with their network, security, management and data services. This makes containers into a “first class citizen” for cloud applications, and accelerates adoption by cloud customers. However, customers want more than this – Cloud Native applications that can run at scale on any infrastructure.

While IBM Cloud and Joyent were already offering containers as a first class object before 2017, we can admit that neither took the industry by storm. As all major clouds jumped to offer managed/public Kubernetes offerings, finalized by AWS announcing EKS at re:Invent last week, we did see interesting projects like Azure Container Instances and AWS Fargate come to life in 2017. With a significant amount of serverless activity blurring the lines, using infrastructure painlessly via containers and function-centric computing is definitely a 2017 thing.

Customer demand for Cloud Native, and freedom from lock-in, leads to more solutions for enterprises that cannot move all their applications to the cloud immediately. Private enterprise application and container platform vendors fight for leadership – Docker, Pivotal and Red Hat shouting the loudest. Cloud Native follows the same hype cycle as big data and cloud before it. Meanwhile, developers ignore all this, and pick their own tools from the emerging Cloud Native landscape.

Well, if nothing else we can agree that the cloud native landscape is continuing to grow like crazy and developers are picking their own tools from a dizzying array of possibilities. Whether you are a fan of the official landscape view via the CNCF or not, as Dan Kohn continues to show conference to conference with ever-smaller-icons dotting the image, its a difficult job to keep the landscape up to date! Enterprise vendors are definitely in the game to capture enterprise customers where ever they are on the timeline of “cloud adoption.” From IBM’s IBM Cloud Private (ICP) offering for on-prem Kubernetes, to OpenShift from Red Hat, to the MTA program coming from Docker alongside their enterprise partners, the fight is definitely on. 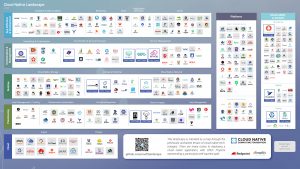 Political and economic nationalism lead to a far greater emphasis on data protection and repatriation. While enterprises seek to benefit from the flexibility of Cloud Native application architectures, their customers will want a clear privacy, security and data ownership story. This cannot be trusted to zombie operations teams using a pre-cloud compliance playbook. Vendors who can deliver “security that moves with your app” will benefit.

Security is still a huge area of activity across cloud native. The vendor space is crowded and getting more so, not to mention public clouds looking to move from “we have containers” to “we have containers and we can provide infrastructure with FIPS 140 certification, or EU data privacy (GDPR) segmentation, etc. etc.” Per the security that moves with your app comment, Grafeas and the Moby Project’s libentitlements work are both quite interesting projects announced late in 2017.

Big acquisitions as Cloud and Enterprise come together

When combined, these predictions imply acquisitions in the next 24 months. The big cloud providers hold all the cash, and the enterprise incumbents have the customer base for the next stage of cloud adoption. Google and Microsoft will probably make the banner plays, with Red Hat, Canonical, Docker and Mesosphere as the biggest prizes.  IBM may also buy Pivotal from Dell.

Alexis wins this round with a “24 months” hedge! We’re only halfway through, and although in my opinion major acquisition activity has been very light apart from Deis to Microsoft, he gets a 12 month reprieve on a score here. And, no, we didn’t buy Pivotal, yet.

Overall, I’m quite impressed with the foresight of a year ago. Impressed enough that I’m wondering if Alexis should consider a career move towards sports betting or a Vegas relocate for Weave. More seriously, 2017 was a very interesting year for cloud native, and the activity and hype around all things cloud, containers, and serverless seems to be pushing higher, unabated by the turning of another year.